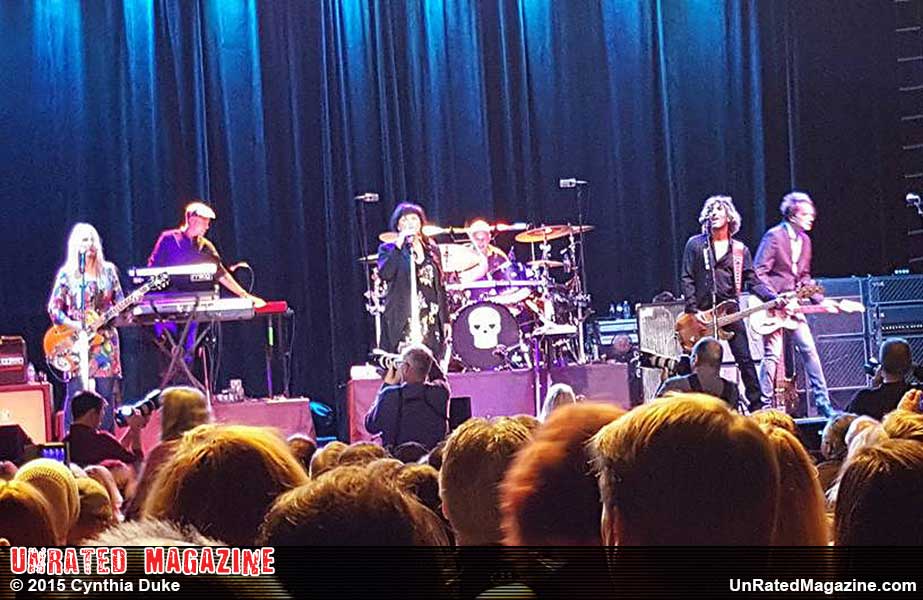 A sunny day in San Diego turned to an evening of moody clouds, wind, rain and dankness. A forty minute drive to Harrah's Resort So. Cal. in Valley Center turned to pitch black night with windy roads in the hills that made my palms sweat. Only the lights reflecting off the road reflectors guiding me. Being pushed along by the locals behind me didn't help matters. I wanted to drive like a little old lady. I thought of the Julien pies that were made out this way, close. I must go there someday...in the day.

I was going to see Heart for the first time. Somehow, I've passed up many opportunities to see them but, tonight, gripping the steering wheel tight, I was about to experience their stage show.

After several lineups and name changes, Heart finally formed in the early 70's. Wikipedia states, "Heart is among the most commercially enduring hard rock bands in history." After all, who doesn't light up like a firecracker when they hear, "Barracuda" or "Crazy on You?" These of course not being their only hits. There's a plethora of them.

After a Jack and Coke to calm my nerves I entered the venue and took my seat. Heart graced the stage at 7:15. A svelte Ann and Nancy taking up position along with the rest of the band. We've all heard Ann belt it out in the recordings but, hearing and seeing it live...just crazy cool. Makes you stand in awe.

The current lineup was introduced before the second song. Drummer, Ben Smith; bassist, Dan Rothchild; guitarist, Craig Bartock; keyboardist, Chris Joyner; guitarist, Nancy Wilson and of course singer Ann Wilson. The audience was a lively bunch not afraid to stand up or wave their hands in the air and...well behaved.

Three songs in I was kicking myself for not having this experience as many memories already. Why so long. Oh well, better late than never, I say.

Five songs in, Nancy introduced a new song written by Ne-Yo who, is one of the song writers for the show, "Empire," called, "Two." A ballad that really brings out Nancy's voice.

A few songs later they broke out with, "Crazy on You" and "Barracuda" which drove the audience wild and encored with three Led Zeppelin covers that were hit out of the park.

Heart are a bonafide OG rock band that you must see if you haven't and see again and again if you have. This is what's left of the tour schedule, http://www.heart-music.com/tour. If you are one of the lucky ones that have a show in your town, GO. If it was worth a windy drive in the hills on a dark, cold and rainy night for me...I'll say, for you, it's well worth it and you'll probably have a much easier trek. So what are you waiting for? Book those tickets!