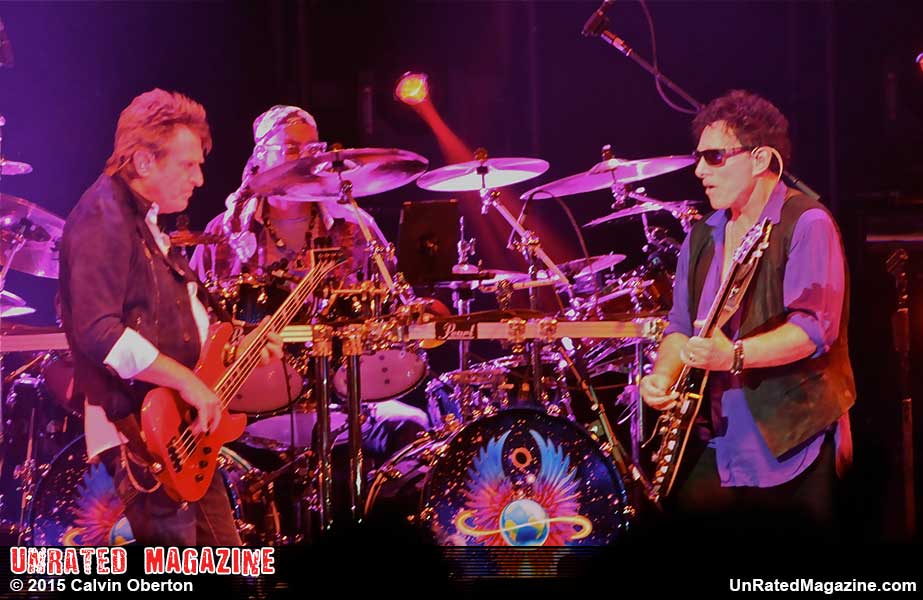 Here is Journey 35 years as a touring super group and is still making a mark in the pages of rock history. With Journey's own Neal Schon opening the show with his new solo album"Vortex." Very impressive opening act. But maybe you'd have to be a guitar player or a real musician to really appreciate this opener.

But now lead singer Arnel Pineda, who, in his own way, has helped to write the most recent chapter in a history that dates back to 1973, when Journey was positioning itself as a jazz fusion group in San Francisco. The Filipino front man not only does justice to the songs made famous by Steve Perry one of the more unmistakable rock voices of the last four decades.

Journey had added a song that was recorded with Arnel 7 years ago which actually shows that Arnel has a unique voice of his own.

I'd like to hear more the "Revelation" album live but I guess I now have to get myself the album to hear more of Arnels sound.

This is the first time I have ever seen Journey live but I must say I have seen a lot of Journey tribute bands live. At which point I had not wanted to listen to any Journey songs for most the past year. Now that I've seen them live I have reinstated my Journey songs into my CD collection in my car when I drive. That is how impressed I was with this show.

On stage, Pineda couldn't be more different than Perry in many ways. Pineda is like a human slingshot, jumping off platforms and running between band members.

The night was full of one hit after another from the opening with "Separate Ways."

Now to the ending the song Don't Stop Believin'" On Saturday night, Pineda got the song started, and the crowd took it from there. And so it goes for many people, has become a national anthem.

As far as the venue in Hamilton "First Ontario Centre" formerly "Copps" you couldn't get a better venue for this great stage show. Not a bad seat anywhere in this arena. Almost like watching the band at Massey Hall. Very intimate setting for a band that could have had the same stage set up for 30,000 seater show but I would give it a crowd of maybe 4,500 that night. Good for me & good for everyone at the show.