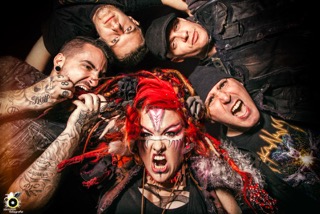 There is a time and place for everything. That can simply mean this something truly amazing will happen. I have been on a major roller coaster ride this year. This thing called life has presented me with a ton of good and bad: 1) Another failed relationship that was a waste of time. (It was 5 months. I am not one to cry over spilled milk.) 2) A major career change. 3)And just realizing what is my purpose in this world.

I believe I was given such a great opportunity in the past few months to write for this magazine. I have met some amazing people and inspiring artists which is about making real music. Out of all the ones I have interviewed so far, Meka Nism holds a special place in my heart. This band is simply what is needed in this world.

I truly cannot get enough of this band and the music. Their second album "The Shift" is a work of art. The EP takes you on a journey through so many levels of brilliance in metal and rock. I will admit, when I first interviewed them, I did not know who they were. Ever since, I have become a part of "The Tribe."

Meka Nism has been on tour with Trapt starting December 4, 2015 in Little Rock, AR. The final leg of this epic tour happened in Springfield, Illinois at Boondocks on December 21st, 2015. When I was granted permission from "my big girl job" to take a day off, you are pretty certain I hauled my ass down to Springfield on a 3 hour road trip to meet up with the band.

I was literally jumping with excitement to see Meka Nism play live. I have done nothing but watch their videos/performances on YouTube. My good friend, Stacy, and I showed up to Boondocks at about 6:30 pm. The line was a little insane to get into the venue. A hint was thrown my way to the back doors to meet up with the band. The awesomeness of Bobby and Reed showed up and the night had officially begun.

I got to hang with the guys at the merchandise booth and see the magnificent group of current fans buying up t-shirts, hoodies and CDs. (I, myself, got the super cozy hoodie. Hey, a chick needs to stay warm during those Chicago snowstorms.) Each band member: Bobby, Reed, Jay, Alvin, and Jeremy (Meka was getting her astonishing outfit together.) all spoke to each individual admirer and I could purely see the appreciation among the bands faces.

Showtime was at about 8 pm after the first band, Dead Till Dark, was done with their set. I could see when the time came to play, each band member had their game face on from Meka Nism. The moment arrived to set up and go kill it on stage for the Springfield crowd.

Shaking with anticipation, I was there a fan of Meka Nism. I was not there as Coren McLeod: the writer for UnRated Magazine. I wanted Meka Nism to kick ass and take names on their final show of the tour. (Yeah, thats cliché. Get over it...)

With the crowd beginning to wonder when the band will start to play, the haunting sound of the song "The Shift" began. Jeremy started to pound away on the drums like he had a mission to shock. Bobby and Reed busted onto the stage with such stellar energy it got noticed right away. Alvin has this cool and calming effect while playing the bass. While Jay can be called the "Master" of the keyboards. Meka came out in all of her glory. Her stage presence is so mesmerizing. I simply love her look and how she has such control of the room. The entire band just syncs so well together. I seriously believe this group of people were meant to play in a band together. Between the chemistry, their enthusiasm and their commitment to putting on an outstanding show, it works really well together.

Like I stated before, I love the entire album "The Shift." However, there are two songs I am particularly fond of: "Mouth of God," and "Phoenix." When Meka Nism started to play "Mouth of God," I just about lost it. That song is what other bands should model their music after. This was the second song performed from the band. All I can say is WOW. Between the dancing on stage and the total amazement of hearing it live, I noticed the rest of the audience was totally getting into the addicting sounds of Meka Nism. Meka's voice can be angelic and than she can turn on her metal side with a massive growl.

The song "Phoenix" is such a stand out on the album. "Phoenix" is a duet between Meka and Reed aka "Freedom." One of my favorite all time duets between a female lead singer and a male vocalist is "Close my Eyes Forever," by Lita Ford and Ozzy Osborne. That song got my attention with how great the two vocals worked side by side. Meka and Reed were so on point during their performance of this song in Springfield. The melody and the harmonizing of their two voices together has people taking note of how talented this band is. The lyrics are wonderfully written and it truly spoke to me on a different level. What this song says to me is every once in a while you can be down in the dumps, however, there is always a light that can guide you through it. I seriously loved seeing this song live. I even asked the band if they were going to play "Phoenix." Well, I guess I got my Christmas gift early. I was so pleased.

The set of songs played by Meka Nism gave people at Boondocks a hard core taste of what an Orlando band can bring. The entire performance was a hard, in your face, high electric fusion of what rock should be. Their final song of the night was "Mekaorophosis." And in my humble opinion, what a stellar closeout to a phenomenal performance. The capital city of Illinois was spellbound and wanting more from Meka Nism. I was honestly so proud of Meka Nism giving their all in their last performance of this tour. I kept thinking, "I met this band back in Palatine, Illinois two weeks ago. I feel like I have known them for a lifetime..."

After all was said and done, the entire band exited stage right. Springfield for sure felt "The Shift." Stacy and I headed back to the merchandise table. A huge line formed and it was obvious Meka Nism did take some names. New fans were lining up to tell the band about what they thought of their show. I remember one lady in particular. She came up to me and asked, "Do you know the band?" I explained to her that I had an interview with them about two weeks ago. She goes on to tell me that she was floored by them and wanted to take a picture with the band. Yet, she was too shy to do it. I literally took her phone and said, "Get your ass behind there and take a picture with them. They will not bite." Well, let's just say this lady was very happy with the outcome.

I only have high hopes for Meka Nism especially in 2016. Iam a big music lover and this band literally has taken my world by storm. From the first time I meet up with them in my Northern Suburb of Palatine, Illinois to traveling 3 little hours to see them play their last show on the Trapt tour, I can say I am happy to be a fan of such a wonderful group of people. This made my year of a failed relationship, a new career change and finally finding my purpose in life meaningfully. I really want to thank Meka Nism for taking me into their Tribe. I have found my voice and what I have to do in this world. I have been enlighten by their music and I can only see greatness coming out of this band more and more.

Come 2016, make sure you get out of your little bubble of "safe" music and step into "The Tribe." I am glad to have gotten to know this band and I will forever support them in any way I can. If you haven't yet, check them out on Facebook, Instagram, Twitter and their website mekanism.com. Your mom would be proud of you. #Cheers

The Shift
(n.) is about transformation;
purging one's prior limitations;
the invitation to elevate your consciousness;
the collection of songs will activate your internal revolution