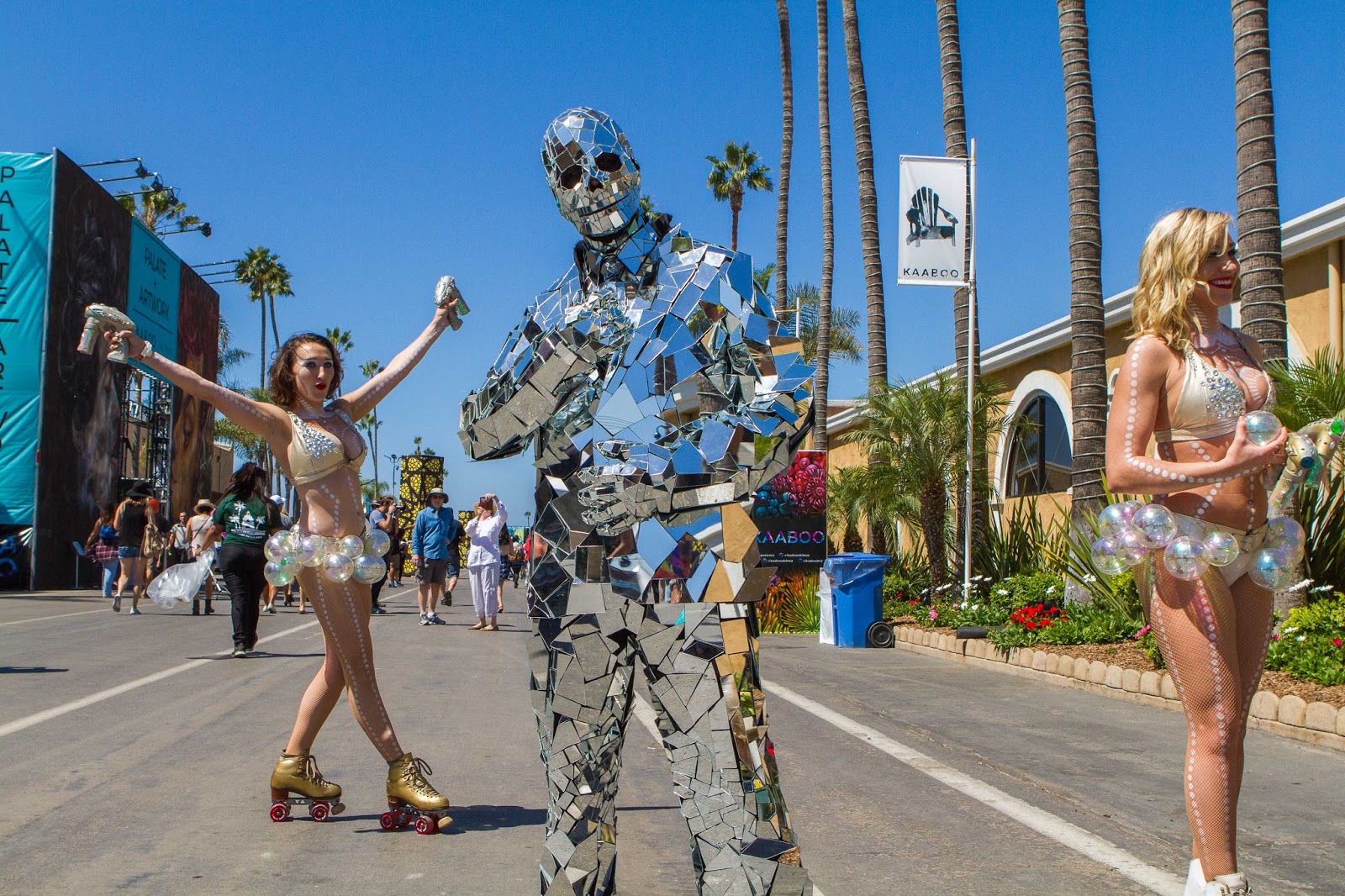 Pam and I were getting into the swing of things by Saturday. By now I knew not to expect to get into the photo pits, to take it easy and was looking forward to the day.

We started out the day with another media brunch, this time in the media room. It was sponsored by Sambazon. We had a delicious A«ai Bowl. It is blended A«ai berry and you have a selection of dry and fruit toppings. I put all the toppings on it.

First we went to see Aquile on the small Tourmaline stage. Set up with backup singers, two saxophonist and the usual rest of the band instrument. We watched for about 20 minutes. Aquile is an artist that was on The Voice. Here is his blind audition on the show. Check out this video of him performing, "Typical" on "Roland Sessions" where he is using his gear to duplicate rhythms, guitar, voice and more to create a band sound. It's amazing.

Next we headed over to the Trestles stage to listen to the Tennessee sounds of Judah and the Lion where I took some shots from behind the audience. The band includes a banjo player, mandolin player, accordion player and guitar, drums and keyboards. Check out their video, "Rich Kids."

From there we tried to go visit the Butter Lounge next to the Sunset Cliffs stage but, were denied access. I really wanted that Butter Chardonnay! So, we went to the general admission side of the stage and got upfront by the barricade early, thanks to some very nice people, as we would be staying at this stage for the rest of the day. I had decided I would shoot from there and enjoy the shows. Carl Denson's Tiny Universe band (a great band by the way) were playing at the time. We were waiting for the Struts at 3 PM.

Here is where it gets a little nasty. Four of us were sitting up front for the shows. Pam, two other girls against the barricade and a lady beside me had a blanket that her and her friend were using. Her friend was taking pictures and the other lady was sitting as she just had had gallbladder surgery. Now, I wasn't expecting them to be able to have their blankets once the main bands started but as soon as the latter band finished, not just before the Struts started but, right after Carl Denson finished, a guy came up, stepped pass the lady's on the blanket and stood in front of them on their blanket. This caused an uproar around us. The ladies had said they had got there early and earned that spot and it was unfair of this guy to just cut in. God forbid, you leave a little bit of space open at a concert. He blurted back that they were taking up too much space and just stood there.

At this time I was getting irritated, as we stood there, the people behind us that managed to rush up and cut in were practically chanting how proud they were of themselves for cutting and cheating people who got their earlier. Then I had a girl asking me why I wasn't in the photo pit, I explained why and that I wasn't going to try anymore because of the situation. She kept going on about, how she didn't understand and there were plenty of photographers at the Grandview stage, blah, blah, blah. She just didn't get it and was probably just wanting my spot. I guess I wasn't allowed to be their either by her mindset. Between this, the people chanting, I got fed up and took my stuff and went to the photo pit and got in. I was really looking forward to Lenny Kravitz and Aerosmith later but, that was ruined. 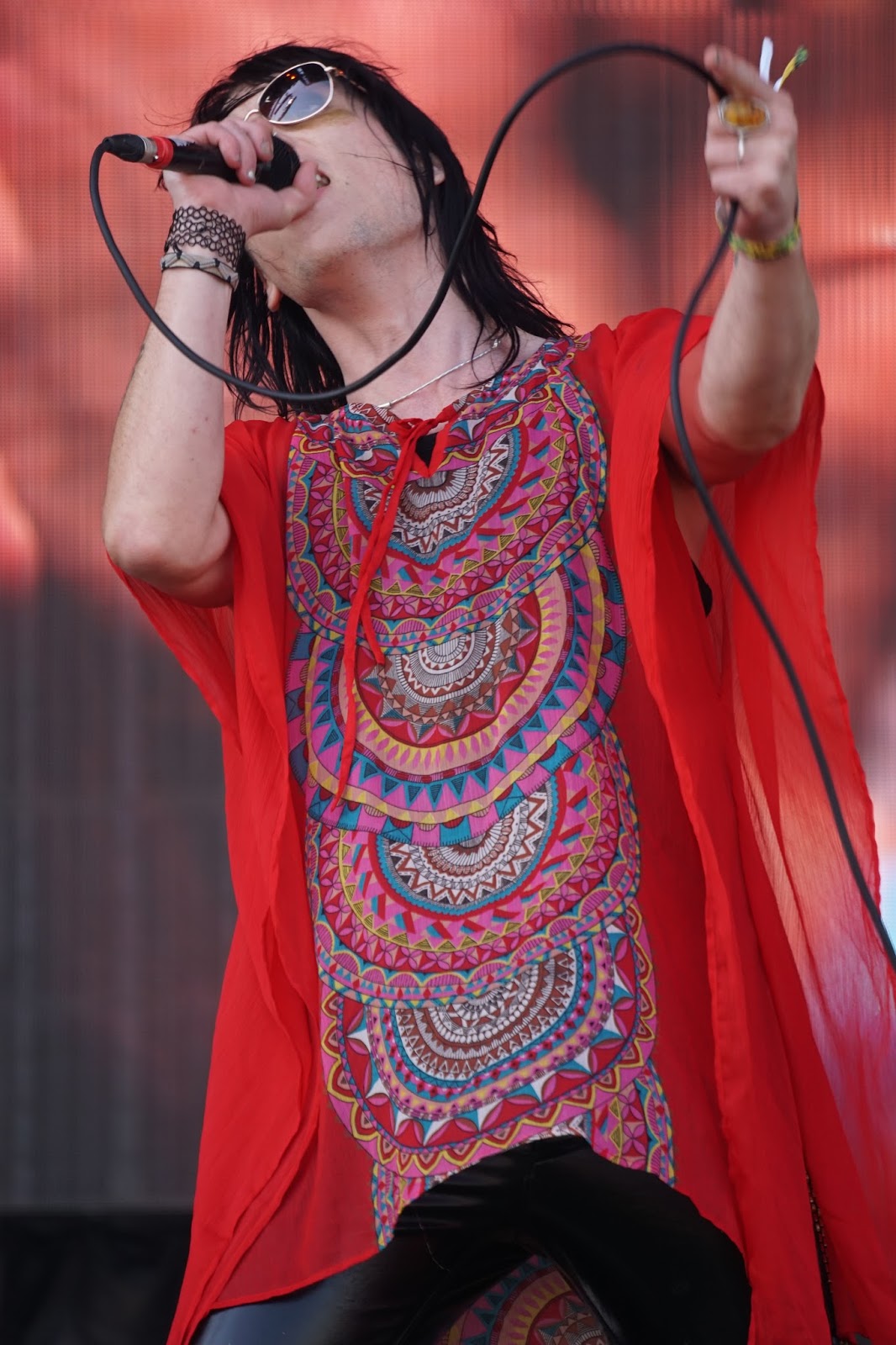 While in the photo pit waiting for The Struts I heard a commotion and looked at where I was just standing with Pam. Somebody from behind the gallbladder surgery lady had just pushed her into the girls sitting against the barricade. I was in shock and stood there with my mouth open not believing what just happened. This was one of the worst audience experiences I have ever seen in all my concert going decades.

To those people and that guy that cut and rushed up, you are inconsiderate, selfish, children who should be ashamed or yourselves, not proud. How would you like it if somebody did that to your mother. Would you even care?

Anyway, after the pit, I waited for Lenny Kravitz with the other photographers to get in the pit. This was another no access moment which had everybody upset. Their was one older lady protesting the loudest about it. Last minute we were allowed access and every body rushed in. Their was a lady their checking for photo badges that were giving for photographers that had apparently signed a separate release form for Lenny. So back out I went.

Lenny was on by now and I walked away to go see the Goo Goo Dolls next and see what my pit chances were. I took a few exit shots of the big side screen.

Back in the media room I was walking across the room when the lady photographer that was protesting about not getting into Lenny Kravitz came in through the doors loudly stating how she hated Kaaboo, blah, blah, blah. My guess is that she won't be invited back.

So, interesting day so far, I thought to myself as I grabbed a beer and went out to the balcony to wait for Goo Goo Dolls to hit the stage. Pam had come joined me after Lenny Kravitz and just before the Goo Goo Dolls came on I went down stars at the Trestles stage and attempted the photo pit. Denied. So back up I went to the balcony, tried to get some clear shots and watched the show for a bit.

We decided to go back to the Sunset Cliffs stage to catch a little bit of Aerosmith on the big screen. We were pretty far back but not far enough to be out of distance for hearing it loud. It seemed so quite. Suddenly the volume went up a bit but still too quite. So, as it was like watching them on a TV screen at home with the volume low we decided to try to catch the end of Fall Out Boy way on the other side at the Grandview stage. I got caught up in taking a picture of a Kaaboo sign on the way and as we were walking to the stage the fireworks went off and the show was done. Check out the picture. Foiled again trying to get to Grandview. So we sat to the side and waited for all those people to go through the narrow gate back to the main drag and decided to call it night.

I found out there was a big scene after we had left when both The Chainsmokers and Aerosmith ended at 10 PM and about four thousand people tried to converge to the Encore after hours dance party building where Ludicrous was going to play. They were trying to push their way in when the building was at capacity. Police, helicopters and pepper spray ensued with four arrests.

By now poor Pam was sick but, came anyway.

This day the media room had seafood. I don't like seafood so I went to get a Falafel flatbread plate at Alforon in the Palate section of the building that had the artwork and jewelry in it. Alforon is a Lebanese restaurant located here in San Diego off of El Cajon. We headed back to the media room where Pam had her seafood and I had my Falafel. Soooooo good.

Back to the Palate/Artwork building to do some interviews with the a couple of the artist, Pamela Lee and Mac Hillenbrand. Two of my favorites there at Kaaboo. Enjoy some of the pics and interviews.

We had also found out that Palate wasn't doing so good business wise due to their location at the entrance. People would come in and then move on and wind up eating at the outside food courts further down. Maybe Kaaboo will put them more toward the middle next time.

After this we went back to the media room to wait for Shakey Graves to play on the Trestles stage in from of the media room balcony. We enjoyed a beer or two while watching and decided to head home on account of Pam being sick, me not wanting to deal with the photo pit situation and the people and I also felt like I was getting sick. So home we each went.

All in all I think Kaaboo is a great music festival. I think the two main stages should be a little closer together, though, and a lot more seating along the main and secondary drags to accommodate the older and infirm peeps. There's room for improvement. Everybody was very friendly as far as staff and merchants go, they had some great acts, food etc. There is so much to do, you won't find yourselves lacking in that department.

Lastly, we found out where the name Kaaboo came from which, surprisingly, all the staff but one that we asked didn't know. You'll have to wait for Pam's article to find out. So, be on the lookout.