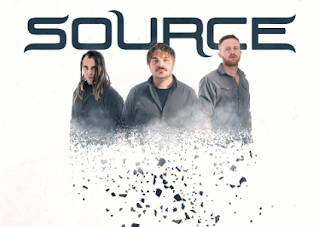 Source: Brings on New Energy to the World of Metal

An Interview with Paveme3nt Entertainment Band Source on April 1, 2016 at Back Bar in Janesville, WI, USA

Source Brings on New Energy to the World of Metal

An Interview with Paveme3nt Entertainment Band Source on April 1, 2016 at Back Bar in Janesville, WI, USA

I have learned that tour life can be a long, tiring experience for a lot of bands. Being on a bus, sharing the same bathroom in a very little space cannot be easy for anyone. However, if you are doing something that you truly love and have a great deal of passion for, it is all worth it in the end. Would anyone disagree with that? (Yeah, I do not think so)

I had the great pleasure of meeting an up and coming band from Boulder, Colorado: Source. Source is currently on their first tour with Trapt (Yes, Trapt. Yet again) The band first came together in 2013 with a sort of spiritual awaking among each other. Here is a brief description of the band:

"Boulder Colorada's,SOURCE have just inked a deal with Pavement Entertainment. The band combines a unique blend of Progressive Rock/Metal with intricate melodies and ferocious riffs. Formed in 2013, Ben Gleason, Dan Crisafulli, and Georges Octobous create consciousness based music through the exploration of flotation tanks, philosophy, meditation, yoga, and other embodiment and mindfulness practices. Their music is an expression of the sensations experienced on this planet, the profoundness of the human experience and the beauty of all that is."

When I arrived to Back Bar in Janesville, Wisconsin on April Fool's Day, I first met the lead singer/guitarist Ben. He was one of the most super chilled people I have ever met. If you know me, I am a very high energy chick that is nonstop. (Squirrel!) Just being around him made me feel so at ease when I am typically nervous before any interview.

What I love most about my job is getting to know each band on a more personal level and really talking to them like I have known them for years. That is exactly what I got when I was able to hop onto the tour bus of Source. Just a few dudes chilling, hanging out and getting mentally prepared to expose their music to the town of Janesville. (Along with their tour manager Brent and his fiancé Diamond. Thank you so much for your kindness Love you too!) Dan, the bass player, arrived with a cool persona and a great passion for what he does. Then, here came Georges: The high energy, arms that are like rocks drummer. Georges was such a goofball, yet, one could tell his main focus was all about music.

Once I got to sit down with the guys, I wanted to truly get to know them. I wanted to know how they met, when this crazy train got started and what was next for them. Here is what Ben, Dan and Georges had to say:

UnRated Coren: Congrats on the tour! Very excited for your guys. So, I have to know: How did you all meet?

Dan: I just moved to Colorado, I called looking for isolation tanks. I saw Ben's website. They were selling a new tank. I was like, "Hey, do you need some extra help?" I was looking for a new job. I called Ben straight for 3 weeks, bothering him. Until he finally called me back. Then, we just started to talk about music. Ben was like, "I want to start a band." And I told him I play bass.

Ben: So, Georges was training at my ja chi do gym for years and I never talked to him. I never really introduced myself to him. (At this point, Georges comes over and flexes his arms for me. Of course, I had to feel his bicep and I was highly impressed.) Than, my roommate started training with Georges. He wore an Opeth t-shirt to class and Georges said, "I opened for them once." My roommate, Brad, said, "This guy plays drums." I thought he is like a hippie and plays jam band music. No. He plays metal. We had our first practice late March of 2014. So, this is our 2 year anniversary. "

UnRated Coren: That is so cool! How did this tour with Trapt happen?

UnRated Coren: Who is Scott Wilson?

Ben: Scot Wilson is the bass player for Tantric. (LOVE!) And he is a producer. He owns Sunshine Studios in Colorado Springs. We got asked to play a show down there with this band called Manson. That is how we met Scott and he was like I really want to produce your album. And we eventually got working together. He is on the one that got us hooked up with Pavement He got us hooked up with this tour. He is the one that got everything going for us which is really cool.

UnRated Coren: How do you guys come together to write?

Ben: Pretty much every time I write, is someway influenced in some way shape or form by a floatation tank experience. I own my own floatation tank center in Boulder. People pay me to use them and I get to use them. Than I am super inspired or I had a really crazy experience in there. Some of the songs are about that. And sometimes it like this whole thing just came through me. I'll sit down and just write chords and basic stuff. Then I get together with Dan and bounce stuff off of him. I get some ideas. We work on structure with the lyrics. We take it to Georges. We want it to sound like this and this is the feel.

Ben: The feeling I want to get out to people is the feeling I get when I go to live shows: Wow, I am so blessed to be alive right now. These people open themselves up and share their experiences with everyone here. You start to rediscover what life is really all about. . We go to all these other places and Colorado is such a healthy, happy place. We are like wow. People do things differently around other places.

Dan: Boulder is like there should be a dome over it. You really lose touch with the rest of America.

UnRated Coren: I saw your YouTube video for the making of the new album, "Return to Nothing." When is the official release date?

Ben: It is dropping in August of 2016. The digital version will have radio edits on it. It is for length. There are some 8 ½ to 10 minute songs. We had to cut them down so people can play them on the radio.

UnRated Coren: Will the songs be cut down tonight?

Ben: No. We don't edit for live shows.

UnRated Coren: Ok. Come Georges. What do you have to say?

Georges: BEAST JACK! (An uproar of laughter soon followed after that statement.)

I pretty much let them do the writing. They come up with the ideas they want. I am kind of like their drum machine. (Georges has a DVD out about his experience being a drummer. I suggest you get it.) The DVD promotes the record. It has a lot of footage from the record. There are live drum cans behind me. I explain how to play the songs. Give me your email address so I will send you those tracks (I told Georges I am a fellow drum player myself.) without drums with click and without click so you can try and play what I have done. So, we can share you on our website so you can be part of SOURCE. (How fking cool is that?) Because we are SOURCE and so are you. (AWWWW!!!! Thanks Georges!)

UnRated Coren: Your first show was a week ago. How was that?

Ben: It was in Salt Lake City. It was huge and just awesome... The sound system was awesome. It was at the Complex.

UnRated Coren: So, any dirt happening on this tour? Be honest with me.

Ben: I didn't think anyone was going to nice on this tour. When we got to Salt Lake City, we met Ty, the guitar player for Trapt. He is the nicest guy I've ever met. Then, Chris comes and knocks on our door and gives us our tour passes. I was like "Holy shit." The guys from Super Bob are super cool. Everyone in all the bands, all the techs have been super nice to us. So, I got like no dirt.

Georges: This is a very professional tour. I have done a lot of tours before. Everyone is behaving.

I do have to say, after the interview I got to see firsthand what a fantastic group of musicians this band is. They drew in the crowd at Back Bar like no one's business. I was literally standing there with Aaron, the lead singer of Left with Tomorrow, surrounded by people saying they sound like Tool, GodSmack and Opeth. I could not be more impressed with what they did in Janesville, Wisconsin.

Thank you to Source for exposing me to floatation tanks and seeing the world through a different perceptive. Make sure you check out Source on tour with Trapt. And I always say this yet follow them on Facebook, Instagram and Twitter. (Listen to Source.) Their album, "Return to Nothing" drops in August of 2016. Get your hands on the record. You will be glad you did! #Cheers