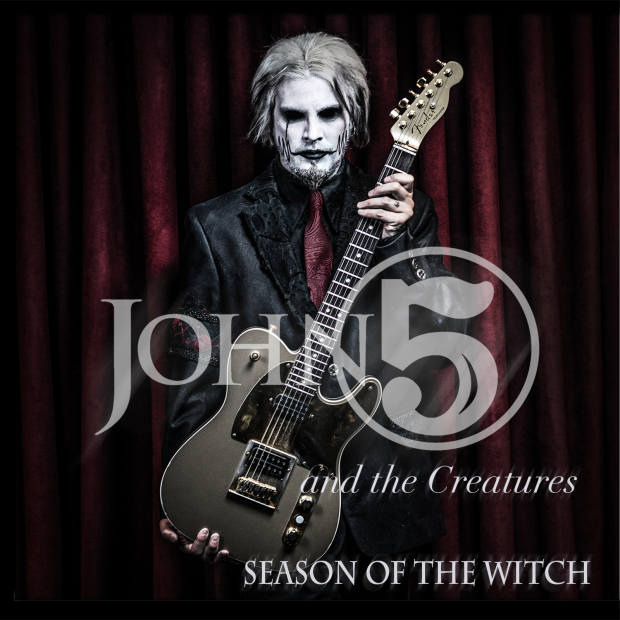 John 5 and the Creatures Live in Chicago

What more can you ask for spending this Easter Day with my family and now spending the night with John 5 and the Creatures here at Reggies Chicago. I've been looking forward to this show for months now as John 5 will not be around Chicago again until Open Air Chicago July 14th with Rob Zombie. Many of you know John 5 is an instrumental guitarist who performs his material from his albums when he's performing on his solo tours, for those who were expecting a typical rock show forget it. John 5 is out on this 2017 tour promoting his new album John 5 and the Creatures "Season of the Witch."

Tonight's rock show involves a talented, finger picking, guitar picking, finger tapping, and virtuoso; with so many diverse styles that makes John 5 a one of a kind. The crowd is filling in and getting anxious and it's definitely a diverse crowd being a 17 years and older show. I'm always glad to see some younger fans showing interest and getting involved in the music world. Stage is now set for the one and only John 5 and the Creatures with intro music playing and out of nowhere John 5 is shredding "Guitars Tits and Monsters" off the new album "Season of the Witch." Yes he did it with a lit up mouth piece in his mouth like he had done a year ago last time John 5 played Reggies but again has instantly grabbed the crowd within seconds of playing the first song of the night.

The fans really got a shot of adrenalin with the next two songs "Flight of the Vulcan Kelly" and "Six Hundred and Sixty Six pickers in the Hell Ca." Both songs have the energy and mystical wow factors that make these fans really admire the great John 5. The performance "Here's to the Crazy Ones" is still currently one of my favorites off of "Season of the Witch" which was spot on like I was listening to the album.

"This is my Rifle" from his album "Careful with that Axe" just kicked ass with the arpeggios and tapping hammer-on pull offs.  From there John 5 slowed things down a bit with "Jiffy Jam" and then with a bit more tempo went into "Hell Haw."

John 5 knows how to mix it up because now he hit's us with "Season of the Witch" that grabs you by the throat and continues too with "Portrait of Sidney Sloan." John 5 gets heavy with "First Victim" from "The Devil Knows My Name," John 5's guitar solo just left these fans in amazement, he's so spot-on. John 5 has fans speechless, one after another, with these next 3 songs from the new album "Season of the Witch," "The Black Grass Plague," "Behind the not Love," and "Making Monsters." I find amusement every time when I hear "Beat It" by Michael Jackson (Thriller, 1982) played on guitar because of those that attempt to play it just suck. However, John 5 plays the "Beat It" close to Eddie Van Halen as you can get. It's amazing how Eddie Van Halen restructured the middle part of "Beat It" and in about ten minutes came up with one of the most well-known guitar solos of all time (and done it for free no less). John 5 told fans how, "thankful he was for the support," how "he loves Chicago," and "there was no better place to end this tour than right here in Chicago."

The encore not encore song the last song of the night since John 5 does not believe in encores as John 5 explains to crowd then plays a "Medley" of songs "Hot for Teacher," "Ain't Talkin' bout Love?," "Cat Scratch Fever," "Seek and Destroy," "Man in the Box," "Thunder Kiss 65," "South of Heaven," "Was Made For Lovin' You?," "Roxanne," "Limelight," "Kashmir," "Beautiful People," and "Killing in the Name Of." The medley was very well executed and sounded amazing.

John 5 and the Creatures performance was well perceived by the audience. No one went home disappointed this night. The Chicago kid Ian Ross who currently resides in Hollywood California was solid on the bass tonight just an amazing bassist for a young cat, super talented and a great find years ago for John 5. Playing on drums tonight was Logan Miles Nix a well-rounded drummer that can play so many styles so well which makes him a perfect touring drummer and most importantly a superb time keeper for John 5. Logan just nailed it tonight behind his set and was brilliant. John 5 killed tonight with his pull offs, hammer-ons, finger tapping, arpeggios, triplets, and balls out shredding as well as John 5's country flair thrown in as well.

If you have never seen John 5 live please go do so you will be amazed and there is nothing better than witnessing his live performance. In addition, John 5, Chicago thanks you for spending Easter with us and most importantly thank your family for sharing you with us.