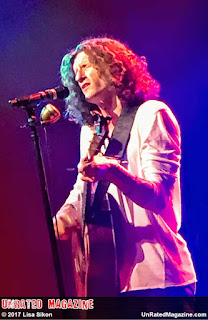 The Revivalists with Atlas Road Crew

Being a new fan of The Revivalists, I was looking forward to their first tour stop in Pittsburgh. The show was sold out with a diverse mix of all ages. The Revivalists music appeals to a wide variety of people, so I wasn't surprised by either the size or the makeup of the crowd. The evening started off with a true surprise, a band out of Charleston, South Carolina, called A.R.C.

Atlas Road Crew (A.R.C.) was formed in 2011 and they came out with a ton of energy and raw power. Taylor Nicholson voice has a distinct quality and immediately owned the stage the minute he started singing. Adding his voice and strong musical performance, A.R.C creates a rare sound that is a pleasure to watch as well as listen. They started the set out with the Voices, a song from their new album, "Halfway to Hopkins." Musically they are a very talented band; lead guitar player, Dave Beddingfield added some bling to his playing when he incorporated a beer bottle as a slide which was fun to watch and produced a unique sound. Patrick Drohan, has some serious talent on the drums, as evidenced with a drum solo. Bass and drums are the heartbeat of the band, but Patrick put an extra kick into his playing, as he is one of the better drummers that I have witnessed playing. Max Becker added a bit extra depth with his solid bass playing. Bryce James rounds out the band on the keyboards. One of my favorite songs was "Low Country Blues," spotlighting their Southern roots with some nice solos from all the band in the performance.

A.R.C. ended the set with Betty, a great blues tune that got the audience rocking. I loved the whole package, the performance and music was just amazing. I did have to get their new album, as I'm a fan of different color vinyl; this one is ghost white but the real prize is the music on the album.

The vocals are more pronounced and it was definitely worth picking up. Seeing the live performance was great and I would totally recommend catching them the next time around, but also pick up this album, especially the vinyl. I want to see more of this band and hope they make their way back this way soon, I know they picked up a few fans with the high octane performance that they delivered.

The Revivalists took the stage and set it on fire with a lot of energy and undeniably getting the crowd into the action. This seven piece band calls New Orleans home and they have been around since 2007 and have released three albums.

The Revivalists latest, "Men Amongst Mountains" has been the most successful album. The live performance was amazing, with lead vocalist, David Shaw, often coming out to the crowd and engaging the crowd a lot. Rob Ingranam was on saxophone, and he could be seen often twirling his instrument here and there, but his playing was incredible, adding so much depth to the music. Ed Williams on pedal steel guitar put out some fantastic solos, while lead guitarist Zack Feinberg was magnificent. Andrew Campanelli and George Gekas were in sync with the drums and base, while Michael Giradot played the keyboard, while occasionally taking out a trumpet and adding to the horns.

The Revivalists played with so much energy, playing songs from the older albums as well as the newest album. Some that stood out for me was Monster, Keep Going and Stand Up. The band added so much to the music, with solos added to every song and getting the crowd involved in every song, either by singing or clapping along to the music. It definitely was a show that I was glad to see, lots of energy and I heard more music that has made me more of a fan. They came out for an encore, finishing up with their biggest hit so far, Wish I Knew You. David often came out and sang to the edges of the stage as well as going into the crowd, which was great to see. I highly recommend seeing this band play live, so much energy and just great music. I hope they come back around to Pittsburgh and make it a regular stop, I'm sure they picked up a number of new fans. This was a great show and I will make sure I make it when they come back.

The Revivalists is a band that has so much to give in a live setting, definitely catch them if they make it back.