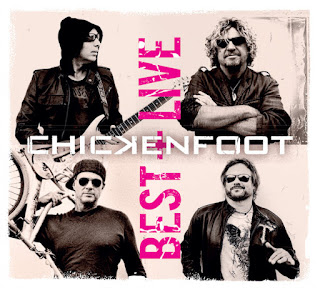 The Red Rocker himself Sammy Hagar back with the Satchman, Joe Satriani, Chad Smith and Michael Anthony with a new song "Divine Termination", which is the first new song in five years for this Supergroup Chickenfoot. This song is on Chickenfoot's newest album Best + Live which is a collection of their best hits as well as 90 minutes of live music recorded from Phoenix 2009 due to be released March 10, 2017.

If you are Chickenfoot fan as I am, you wish that these guys would continue to make albums, as one song in five years is just not enough for these talented musicians. I understand that between all four of them they have very busy schedules and thus makes it very difficult to continue to be a powerful band like Chickenfoot.

Fan or no fan "Divine Termination" is a song that people can wrap their heads around and sit back and enjoy listening too. Like most songs sometimes you need to hear the song more than once. This is a song I needed to hear more than once, not because I didn't like it. But because I really wanted get to know it and get to know it I did. I really enjoyed this song. "Divine Termination" is a song that has a bluesy yet groovy rock edge grit feel to it. Joe Satriani describes the track as "bone crunching, hell raising rock, dripping with attitude and vibe. "Just the way Chickenfoot likes it!" I agree with him about attitude and vibe but not so much bone crushing.

This album's live tracks are perfect for those that don't like polished studio overdubbed tracks. To me there is nothing better than raw performances or raw studio recordings as that is when you can here the magic of the performance, feel the energy or maybe catch flaws or imperfections. Live albums are the way to go in my opinion. This album is a must have for any music lover with great sound quality on the live tracks. Chickenfoot has done a wonderful job on this album Best + Live.

Both the extra CD "LIVE" and the bonus tracks on the best of feature almost every song from Chickenfoot's debut album as well as Sammy Hagar's old Montrose classic "Bad Motor Scooter," The Who's "My Generation" and Joe Satriani's interpretation of "The Star Spangled Banner"Tracklist "BEST+LIVE". I advise that you go out purchase your copy on March 10th 2017.

Chickenfoot is an American rock supergroup consisting of former Van Halen members Sammy Hagar (vocals) and Michael Anthony (bass), solo artist Joe Satriani (guitar) and Red Hot Chili Peppers drummer Chad Smith. The band released their self-titled debut album, Chickenfoot, on June 5, 2009. Regarding the band's status as a "supergroup", vocalist Sammy Hagar states: "We're not a supergroup, we like hanging out together and the music is a bonus. We just happen to be in other groups."

While the band's name and logo reference a disparaging term used to describe the peace symbol, the "footprint of the chicken", bassist Michael Anthony asserts that the name originated from initial jam sessions between Hagar, Smith and himself: "there are three talons on a chicken's foot and there [were] three of us." Later Anthony stated: "it was just supposed to be a bullshit name that we'd used for a while, and then [when] the rumors spread about the band, everybody used that name so we thought, 'fuck it, let's call it Chickenfoot', it all comes down to the music anyway."Chickenfoot have recently finished their second album, Chickenfoot III, which was released on September 27, 2011.