About I'm With Her I'm With Her is Sara Watkins, Sarah Jarosz and Aoife O'Donovan. An impromptu show in 2014 at the Sheridan Opera House in Telluride, CO, sparked the formation of I'm With Her and sent the trio touring the world together the next year. Along the way, I'm With Her formed a special, family-like chemistry, garnering acclaim for their unique blend of instrumental interplay combined with their indelible harmonies, as the New York Times describes, "... that could be sweetly ethereal, or as tightly in tandem as country sibling teams like the Everly Brothers, or as hearty as mountain gospel." Their debut album, See You Around, was recorded in Bath, England, with Ethan Johns at Real World Studios and will be released February 16, 2018.

Folk band I'm With Her paints a mellow sonic landscape with its 12-song debut album release, "See You Around" (due out on February 16th, 2018 on Rounder Records).

Co-produced by Ethan Johns (Ryan Adams, Laura Marling, and Paul McCartney) and the bandwhich is comprised of Sara Watkins, Sarah Jarosz, and Aoife O'Donovan"See You Around" lulls the listener with well-sketched harmonies, beautiful folk instrumentation, and the effortless blend of Jarosz's, Watkins, and O'Donovan's sweet voices.

There is a refreshing realness to the bare sound of three voices interplaying with acoustic instruments.

The opening track, "See You Around," begins with the captivating sound of a vintage mellotron, inviting mystery, like a Jon Brion film score. This cinematic moment fades to the background as the album's trademark fingerpicking is introduced.

From there, the track builds with layers of acoustic and electric guitars, and the three-part harmonies central to the sound of I'm With Her.

A truly folk album created by skilled musicians who play an assortment of stringed instrumentsincluding: guitar, mandolin, violin, banjo"See You Around" emphasizes the natural pulse of voices and instruments. Each breath is heard before each phrase, creating an intimate listening experience. 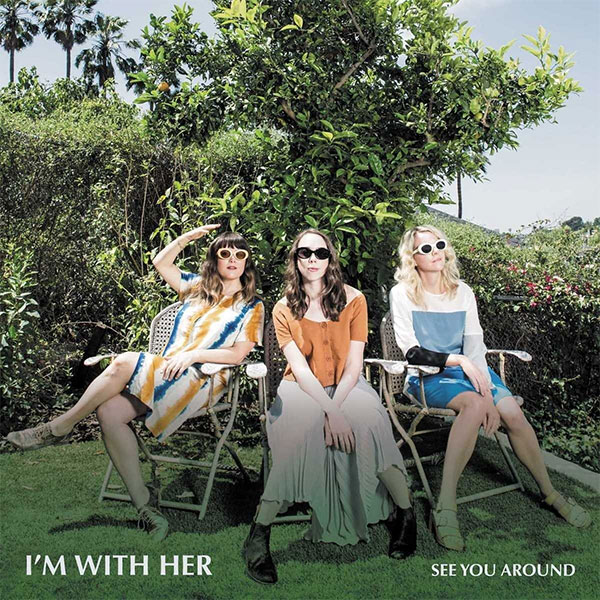 There is an inadvertent nod to Joni Mitchell on the fourth track, "Pangaea," which starts sonically sparse with an almost a Capella question, "What's left when the ground cracks and the sky is black?" The song's running dynamics throughout its three minutes and seventeen seconds build and fall with the repeated lyric "it's a lonely life."

Things shift gears on track five, "I-89," with a rock intro guitar lick that builds to a crescendo halfway through the song. The listener is reminded that this is a folk album when the guitars and banjo meld with the three women's pretty voices. "I-89" is the least "mellow" on the record, and its placement at the half-point is a nice touch.

"Wild One," "Close it Down," and "Crescent City" are classically folk songs, the last one recalling early Indigo Girls. These tunes are straight-ahead, lyric-based, and don't meander much from their initial musical impulse.

"Ryland (Under The Apple Tree), "a flowing 12/8 lullaby with a minimal stroke of harmonies, is gentle and endearing.

Track nine, "Overland," is probably the most commercial record in a collection that clearly isn't aiming for mainstream commercialism. There are no drums or bass featured on the album, and with minimal in-your-face melodic hooks, the production treatment leans solely toward beautifully capturing the unembellished.

"See You Around"ends with the message, "It's a hundred miles that I'm going."

With that, a band with so much raw talent is sure to go far.

PRE-ORDER SEE YOU AROUND

I'm With Her Tour Information from Pollstar