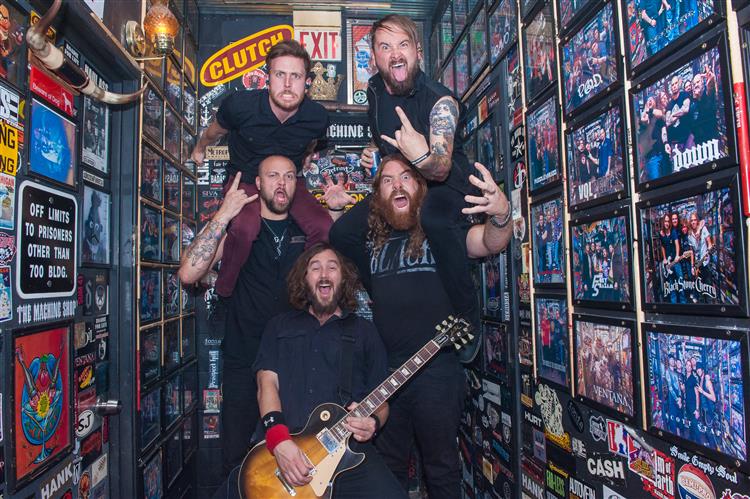 Royal Bliss plays Route 20 Outhouse to a Crowd of Fans 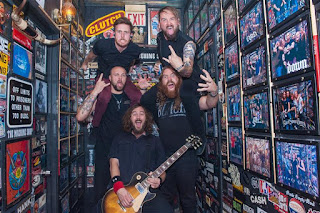 I have a confession to make: I have to go to at least one rock show a week. It is kind of like an addiction now that I work for this amazing magazine. My editor, Dan, called me out on that. #LOL. Seriously, I need my fix 1-2 times a week. This past weekend, I got my fix and then some with the ever popular, #amazeballs band Royal Bliss.

I have been a fan of Royal Bliss ever since I heard the songs Cry Sister and I Was Drunk. (Come on. I am a good little Scottish/Irish girl. Of course I was going to love that song).  Royal Bliss hails from Salt Lake City, Utah and can I just say what a hard working band this talented group of guys they are. Members Neal Middleton (vocals, guitar), Taylor Richards (guitar), Jake Smith (drums), Dwayne Crawford (bass) and Sean Hennesy (guitar) all take their gritty, raw and astonishing flair to the fans for each show they perform.

Well, on Saturday April 9th, I had the best opportunity to actually sit down with Royal Bliss and just talk to them. You know nothing special. (Actually, it was pretty fucking awesome! I got to go on the Royal Bliss freaking tour bus. Yes!!!! The tour bus and it was awesome!) I was greeted by the ever handsome Dwayne, Jake and Sean. (Taylor was getting the merchandise table ready. And I believe I was told Neal was sleeping. (Hey: These guys tour all the time. The man deserves to sleep).

So, my ass got to talk to Sean, Jake and Dwayne. I have to say, Royal Bliss is such a fun group of guys. I laughed so hard while doing the interview. It was for sure a great time.

UnRated Coren: You guys have a really good relationship with 95 WIIL Rock. (A Wisconsin radio station.) How did that all start?

Jake: Tom Kief and John Perry just loved our band. They have been good to us and we just became good friends. We are actually going to breakfast tomorrow with John.

UnRated Coren: Wow. 8 albums so far and more to come. So, how do you guys come together as a band?

Sean: So, Jake, Taylor and Neal have been in this band for 18 years.

Dwayne: I met these bands when I was with a band based out of Florida. I played bass. And when they needed a bass player, I joined. Sean was with Candlebox. We did a tour together in 2008. We played shows together. Candlebox kind of just disbanded.

Sean: So, randomly I got a call from Dwayne or Neal. Taylor couldnt play some of the shows. Fortunately, they thought I was a good fit. And I was thinking, I need a gig. And it was perfect timing. I just got out of a relationship. I just moved out. I put my shit in a buddys house. Thank I was living in Nashville. So, I flew out to go on tour with Royal Bliss and then they just asked, Do you just want to join the band? So, now they are stuck with me.

UnRated Coren: So, the rest of the band is from Salt Lake City. How is it out there?

Sean: I would have never guessed I would have ended up in Salt Lake City. I live downtown and it is beautiful.

Dwayne: It is one of the cleanest cities I have ever seen. It is the air quality. Youre basically in a valley surrounded by a whole lot of mountains.

Jake: We get all of the seasons. So, right now it is becoming really green. Everything is growing.

UnRated Coren: There is a new album coming out June 3rd, right?

UnRated Coren: How is this album going to be different from your other ones?

Dwayne: We have a bunch of co-writers on this album. Like Muddy Pal and Ana Wilson. They are hit country song writers and now we have them. They have known Royal Bliss since the beginning. They live in Utah now. They are big skiers. They kept saying lets write together. The band decided to go into the country direction. We know the word country scares people especially rock fans. Which is understandable, the C word. Honestly, we wrote some really good songs. It is all about connections. It is basically county/rock. Aaron Lewis from Staind is doing it. Lit did a county album. The rock market right now is Metal. I still think its a Rock record with one ballad song on it.

Jake: I dont think anything has changed for us musically. Maybe we turned a couple of notches. We have always written county eques songs. Devil and Angels, I Was Drunk, and the original Crazy. It is kind of who we have been. Rock has slowly become metal. Country has slowly become rock. Country just kind of caught up to where we are. It just makes more sense for us. We are not a metal band. We are not going to be. We dont want to be. Without changing who we really are, we are targeting both demographics.

Dwayne: A lot of fans asked, Did you go country? We are like, Listen to the set first. Nobody even notices a difference. We play all the new stuff in our set. People respond to it. They cheer and scream. I see people and they know the lyrics.

UnRated Coren: So, one last question. I always ask this with bands: Any dirt you guys can dig up on each other?

Sean: I talk to myself in the mirror before I go on stage. I say that, I love myself. I am going to change peoples lives tonight. I am the greatest guitar player in the world. I give myself a fist pump in the mirror.

Jake: That is why the mirror is cracked& (LOL).

Sean: My girlfriend is taking a nap. She just flew in. This video we are shooting in Nashville, she is going to be in it. When I met these guys, my introduction to the band, we did the video for Turn Me On. I was a nerd in the video. The girl in the video that was my first time meeting her. We are still together. That was 2 years ago in June.

Jake: Basically without us, Sean would have no life right now. (OMG. Funny!)

Sean: We are kind of bringing back the role. The story line is a little different. In the shot we are doing, there is a cheer leading outfit laying off to the side. The people that got the video (the fans), Oh, I see what you did there.

UnRated Coren: What is the song called you are making the video for?

Sean: Living the Dream. We kind of have a video out for it now. It is kind of live. Like here is a little sample. CMT is taking over. We are getting a director. We are going to drop it on CMT. 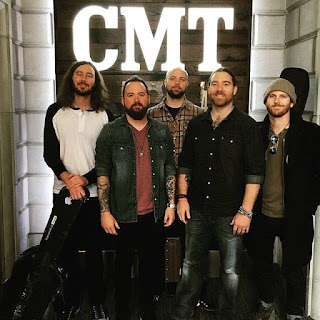 Then, we went into a very cool discussion about tattoos. Plus, I found out ¾ guys sitting there were Scorpios which is awesome. (I am on the cusp of Libra/Scorpio if anyone was wondering.)

I wanted to take the time to thank the members of Royal Bliss for the awesome, very funny interview. I liked you guys before and now its nothing but love. Make sure you check out their new album when it hits on June 3rd. It is called The Truth and if they are playing near you, get your ass out to a show! You will have a great time!!!!