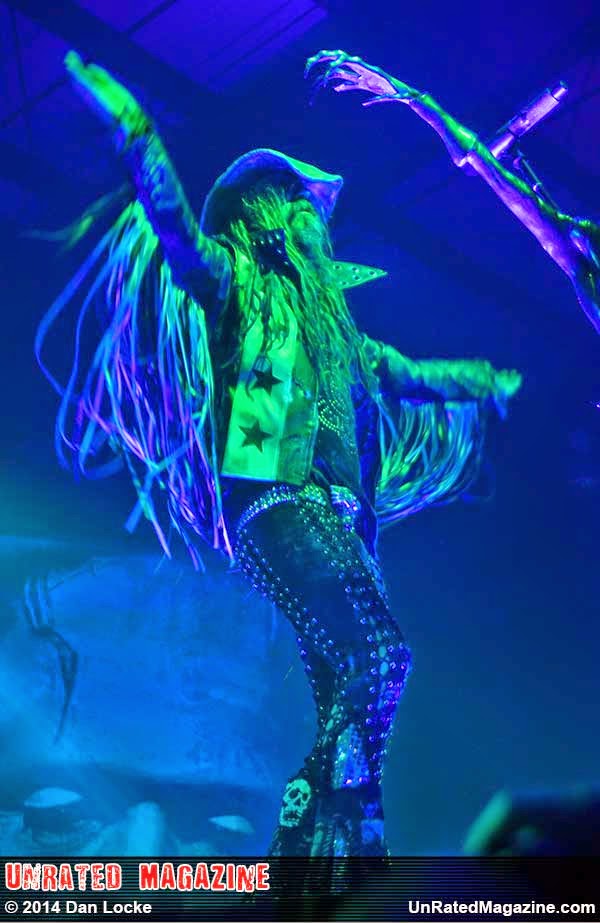 'Tis the season for ghosts and ghouls and that is exactly what I encountered while attending opening night of Rob Zombie's Great American Nightmare, on September 26th at the Odeum Expo Center in Villa Park, Illinois. The spectacle runs until November 2nd, and is everything you would expect from a nightmarish Rob Zombie produced event. However, don't expect a live performance from the man himself, as he only performed on opening night to kick off the festivities...but, I'll go into that more below.

Being the type of person who does not frequent the haunted house scene, I had spent the entire day researching videos or testimonials that would provide me with some sort of insight as to what was awaiting me. I needed a leg up as I was truly afraid. Once I arrived at the Odeum Expo Center, I first saw the line of people waiting to get in...a normal sight for an event such as this. But, it was the flames and sparks that were shooting outward from that line that got my heart racing. As I walked up to the awaiting crowd, there were several performers, all scantily clad, standing atop demolished cars and rusty old oil barrels, throwing flames or pressing spark grinders onto their groins. It was awesome. And it was then when I thought about how all events should begin this way, beginning your experience before you even get in the door. It certainly makes the wait seem a bit less monotonous. Then the doors open and my mind immediately shifts to a mere, "Oh boy, here we go."

When first entering the haunted arena, you will be approached by a staffer to step into a small room to pose for a photo, of which you will be told that Rob Zombie will be superimposed next to you. You're then given a number and told you can pick up your photo at the end of the experience. Continuing on towards the actual entrance of the "house," you will experience the first of three attractions, the first of which is based upon Rob Zombie's 2012 independent movie, The Lords of Salem. But you will experience this haunt in Total Blackout. There is really not much to report on this one, as it is certainly as described... a stroll in TOTAL BLACKOUT. Walking through a maze of nothingness, you will be screamed at and lunged at by who knows who, all while the floor beneath you transforms into some sort of material that makes walking nearly impossible.

Next up, is the El Superbeasto in 3D, where you will be given a pair of 3D glasses upon your entrance in order to get the full 3D experience. This haunt, in my opinion, was the best of the three, as the artwork was simply amazing. Everything, and I mean EVERYTHING was in 3D, the walls, the floor, the ceiling, the props, everything. It was cool and the best part....nobody jumping out at you or screaming bloody murder.

The final part of the haunt is the Haunt of 1,000 Corpses. This experience transports you into the living rooms of serial killers, such as John Wayne Gacey, Henry Lee Lucas, Charles Manson, and the like. It truly was like being transported back into the 1970's, as all of the props were from that era. I can honestly say that it was this part of the haunt that evoked the most emotion, as having grown up in the 70's, the look of the rooms, down to the tiniest of details were brought back....all of which made me shiver with nostalgia. Each room contained a different killer, most of which were extremely skilled at acting completely insane, all while inviting you into their world of terror.

Now that the haunted "house" had concluded, I barely had time to catch my breath before entering a room filled with cash registers and staff asking me for my number from the photo taken earlier. While I searched my pockets for the number, the girl behind the register runs down the price menu that I would need to pay for the photo. You mean I have to pay for the photo? It seemed as though I wasn't alone when I declined and walked away. This promotion was in bad taste and certainly bad timing, as it was mere seconds after exiting the haunted houses.

Another example of bad form occurred to me, having done some anticipatory research as stated above: The event website touts, "The ultimate midway, BLOODY BOULEVARD, with roaming creatures, freak shows, themed food and drink, musical entertainment and creepy activities." Do not expect any of this, at least at the Villa Park, Illinois location, unless you consider the confusing and final exit to the parking lot where the actors are smoking cigarettes, or a guy with a chainsaw milling about, part of an "ultimate midway" or a "bloody boulevard."

Finally, having to weave through the patrons who were still outside in line for the show, we were to go back to the same entrance in which we started so we could attend the concert. That was strange but, whatever. I suppose having directives and obscenities screamed at you during the past hour or so of a haunted house made us all submissive little rats, doing whatever we were told. Once we made it back into the arena, the show was about ready to begin. There would be no opening band and Rob Zombie would take the stage promptly at 9pm. With nothing spectacular to report about the concert, other than Rob Zombie seriously rocks, it was a great show. He played all of his classics and the sold-out crowd was incredibly energized. Which is why I was curious, toward the end of the show, he decides to have an unnecessary audio war with the audience. You know, the typical, "Who can be louder...the right side or the left side." Playing this game reminded me of the antics of an opening band, certainly not a headliner...especially not Rob Zombie.